Our God-story this week comes from Renee Cook one of our newer members of Titus Women:

I grew up in a Christian home. And not merely a “Christian” home, but one with parents who loved God and did everything they could to teach us about Jesus. It’s all I’ve ever known. I went to AWANA, and if you know about AWANA, you know they have little toddlers who can barely talk, memorizing scripture. So from the time I was very young, I had memorized Bible verses and had been taught by my parents that Jesus loves me, that he died for me and that if I accepted him in my heart, I could live with him forever in heaven. I believed it.

Then, when I was in junior high on a church retreat, I began to truly understand what I’d been taught as a child. I decided I wanted to be baptized in order to publicly demonstrate how I wanted to live for Jesus. Fast forward to high school. Our church had an awesome youth group. I had a cool, young-adult small group leader through most of high school who taught me everything about being a godly woman. She challenged us to be pure, and told us all the wonderful blessings she and her husband had reaped from sowing lives of purity prior to marriage. She challenged me to live like the Bible says to. I really admired her and thought it all sounded nice, but I was on a slippery slope in the relationship world.

The whole “boys” thing started out like it does for every girl–around 5th or 6th grade I noticed that a boy was cute. But soon my attitude became “who cares if he’s not a Christian?”–flirt to convert. Then it became, how far is too far? A friend recently asked me how I was drawn into those relationships. She figured if a young girl has an active and involved dad and a safe home and all the right Christian influences in place, like I did, well, that she wouldn’t make the mistakes I did.

Honestly, I didn’t have a good answer to that one. I think it was the enemy–the enemy of our souls who is prowling around like a roaring lion, seeking someone to devour. Slowly, over a long period of time, he devoured me, and I didn’t see it happening. Lie after lie he told me:

“Everyone was doing it.”

“He really cares about me.”

I may have nodded my head at my small group leader’s advice, but I wanted what I wanted and to get it, I told a little lie here and there, figuring it wouldn’t hurt anyone, right? Some advice I picked up from my dad recently was, “You can’t win a war, you don’t know you’re fighting,” and I didn’t know I was at war. I believed in Jesus and learned that verse about the “full armor of God”–but I didn’t really get it. I didn’t realize the extent of the truth that Satan was prowling around waiting to devour my heart. And he’s not stupid. He didn’t make the sin look ugly, he made it look awesome.

Something I recently heard is so true–sin always over-promises and under-delivers.

And so we’ll fast forward through my fair share of lame high school relationships. You’d think I would have learned my lesson with all those tears and broken hearts, but I got myself into one more mess.

During my first year in college, I got into a very bad relationship. It was destructive, deceitful–the epitome of everything a Christian relationship is not. Actually, it was slightly worse, because I had convinced myself that it was “Christian” (although I couldn’t tell anyone else about it, especially Christian friends). I just knew this was it. He was the one. I thought we were in love.

Talk about self-deceit. The thing is, deep down, I knew the truth. As soon as it started, I could hear the Spirit whispering, “Bad idea. Don’t do it. Don’t go there.” But I ignored the voice until I couldn’t hear it anymore. And then I did what I wanted. And to get what I wanted, and still try to look like the perfect Christian, I lied to everyone I loved. And I lied to myself. I had convinced myself of something that was not true until I really believed it. I had exchanged the truth for a lie.

Well, as promised in scripture, my sin found me out. It all came into the open, and I felt really bad. I recently heard something that describes exactly how I felt . . . I felt sorry I got caught, but I wasn’t truly repentant. I was sorry for myself which was evidenced by the fact that when the opportunity presented itself, I jumped right back in–lies and everything. (You’ve figured out by now, that I was pretty slow in learning my lessons the hard way.)

But once again, my sin found me out. And this time, it was different–as if my eyes were opened. Finally, I saw everything for what it really was, and I didn’t know how to process it.

I was actually at home for the summer when this happened, and I was a hot mess. My 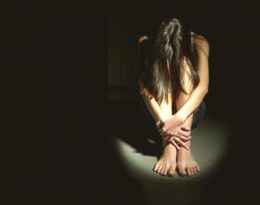 heart was broken, and I didn’t want to talk about it. I felt buried underneath my shame and guilt. I couldn’t believe I had broken the trust of everyone I loved, especially my parents. My mom wasn’t sure what to do with me, so she gave me Beth Moore’s book Get Outta That Pit.

In the introduction, Beth writes that we all experience pits in life. Some people are born into a pit. Some people get pushed into pits by others in their life–through abuse or messy family situations. And some people dive into a pit head first. When I read that last one, I thought . . . um, that’s me. Because as much as I would have loved to blame someone else, especially that guy, it was my fault I was in that pit. Though he was in the wrong, I knew better. I had heard God’s voice telling me, “This is a bad idea. This is a bad idea. Don’t do it!” But I ignored Him and pushed away the Spirit so long that after a while, the whisper was so quiet, I couldn’t hear it anymore.

And I jumped into the pit, head first.

Beth Moore bases her book on Psalm 40:1-3 which says, “I waited patiently for the LORD; he turned to me and heard my cry. He lifted me out of the slimy pit, out of the muck and mire; he set my feet on a rock and gave me a firm place to stand. He put a new song in my mouth, a hymn of praise to our God. Many will see and fear the LORD and put their trust in him.”

Beth explains that Jesus isn’t at the top of the pit cheering us on–climb faster, push harder, you can do it. No, he got into the darkest pit we’ve been in when he was on the cross, and he comes up underneath us and pushes us to the top victoriously. As I read those verses, the truth of scripture hit me harder than ever before. I instantly felt free–free from the sin, free from the guilt. It was as if God Himself spoke those verses directly to me.

And I fell in love all over again.

Sure, my heart was broken, but Jesus came to restore the broken-hearted. I had a new hope that Jesus could heal me . . . and he did.