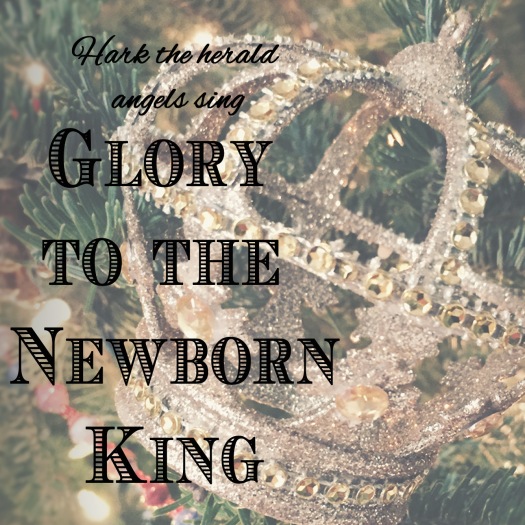 Traditionally, on the fourth Sunday of Advent we consider that Jesus is King.

Joy to The world! the Lord has come; Let earth receive her King . . .

This, this is Christ the King, Whom shepherds guard and angels sing . . .

It can be difficult for independent, democratic Americans to fully understand what kingship means, but this is the story of the whole of Scripture: God is King.

According to the dictionary, a King is:

King [king]  noun 1.  a male sovereign or monarch; (one) who holds by life tenure, and usually by hereditary right, the chief authority over a country and people.

At Christmas, we celebrate the reality that the God of universe took on flesh and became a tiny helpless baby. That baby in the manger is the Light of the world. And He was born Savior. That baby is God Incarnate.

And that baby in the manger was born a KING, the fulfillment of ancient promises.

Generations before Jesus was born and named Immanuel, God with us, Isaiah promised:

“A child will be born to us, a son will be given to us; And the GOVERNMENT will rest on His shoulders; And His name will be called Wonderful Counselor, Mighty God, Eternal Father, PRINCE of Peace. There will be no end to the increase of His GOVERNMENT or of peace, On the THRONE of David and over his KINGDOM, To establish it and to uphold it with justice and righteousness.” (Isaiah 9:6-7)

Jesus was that child given, and on His shoulders rested government – the right to rule.

Peace in Hebrew is Shalom, wholeness or wellness, welfare. This is a whole self word, soundness of spirit and body, things as they should be, between God and men.

Isaiah tells us that His authority brings wholeness, makes things as they should be between God and men. Not by might or by power, but by sacrifice and love.

This is the gospel.

Christmas is the gospel.

The GOOD NEWS that the King has come into this broken and hurting world.

It is good news because that baby in the manger, that baby king did not stay a baby.

He grew up like a tender shoot before His God (Isaiah 53:2). And as a man, He stood up before the great power of His day: Pontius Pilate, representing Caesar himself. Caesar, King of Rome, who was known as the very “son of god.” That baby King grew up to be asked by Caesar’s representative, “Are you the King?”

You say correctly that I am a king. For this I have been born, and for this I have come into the world, to testify to the truth. (John 18:37)

For this He was born. For this He came into the world, to testify to the truth. What truth? The ancient truth of Judaism, Yahweh is King.

It is worth noticing that when the long awaited Jewish Messiah King came, He came in such an unexpected way – as a baby born to a poor peasant teenager in a small town in Israel.

And when He was enthroned as King, it was not with pomp and splendor. He was enthroned upon a cross, with a sign over His head reading “Jesus, King of the Jews.” Victory through love, death, surrender, and suffering. This is the story of our King.

“In the ancient world one became king by inheriting the throne or by gaining victory over the currently sitting ruler. . . . The irony is that the very event that seemed to show clearly that the Jew from Nazareth was merely a pretend Messiah and a pretend king was the occasion at which he became king; not only of the Jews, or over the Roman Empire, but over the whole world. The defeat of Jesus of Nazareth on that Roman cross over two millennia ago was his coronation. On that cross He won victory over all earthly powers and kingdoms and took his rightful place on the throne. On that day, Jesus became King.”

So, as we celebrate the baby in a manger, remember that baby was born to be King.

He became King not through politics, force or military conquest, not even by popular vote.

He took up a crown of thorns and won the victory through suffering and death.

He is our King now, and our prayer is “thy Kingdom come.”  We can live that prayer this Christmas and every day.

With that in mind, I wonder:

Who (or what) is King of my Christmas?  Is it my to do list? Is it impressing people with thoughtful gifts or a Pinterest-worthy home? Making sweet memories with my family? Decorations and baking and toys and gatherings? These are all good things, but there is no place for them on the throne. There is certainly not space on the throne for stress, which too many of these good things can cause. Jesus is KING.

This Christmas I am asking myself:

Who (or what) is on the throne?

And does my celebration of the baby born in a manger, born to be King, reflect the kind of King He is?

Does my Christmas reflect the heart of this King who reigns in LOVE, and was enthroned through sorrow and suffering? A King who died for His subjects, but through the glory of His Father’s resurrection power, lives today?

Whose birthday am I celebrating?

Merry, merry Christmas, friends. I hope you enjoy all the twinkle lights and decorations. Toss around a little extra kindness, and have a peppermint-scented, hot-chocolate flavored, wonder-filled American Christmas. I hope you get just the gift for which you’re most hoping. Have a very Merry Christmas.

But remember, this is our King’s birthday. What are you giving Him? I think what He wants most is our hearts. So don’t let anything draw your heart away from your King. Let all these Christmas things be reminders that a King has been born. Celebrate Christmas in a way that honors Him.

This week, people all over the English speaking world will sing

Noel, Noel, born is the King of Israel!

And one day, we will sing a new song–the song of heaven–perhaps with the same angel chorus who sang to shepherds in Bethlehem over 2,000 years ago:

“The kingdom of the world has become the kingdom of our Lord and of His Christ; and He will reign forever and ever!” (Revelation 11:17)