I’m so excited to start our Advent series today on the blog. This year we have several fresh voices who will be helping us unpack the meaning of HOPE, PEACE, JOY and LOVE as we anticipate Christmas. I encourage you to join us. Also, be sure to scroll down to the end of this post to download our prayer verse for December. 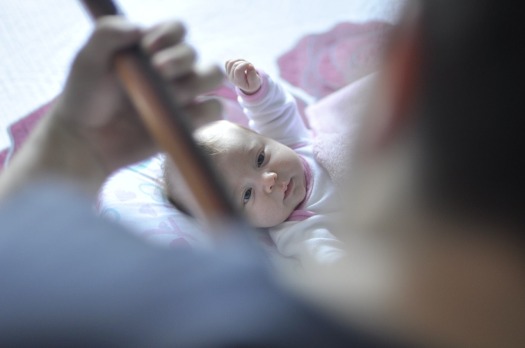 I know some of you are done with Christmas decorating already, but we’re just getting started at our house.  My husband brought in one of our Christmas boxes last night – the one with our favorite Christmas books, movies and music, and our Little People Nativity.  When our boys discovered the box this morning – and the treasures inside – you would have thought Christmas had already arrived based on their excitement!  Each item helps to build anticipation and hope for the crowning event of this season – the birth of a baby.

But why was the birth of this baby so special?  He wasn’t unlike any other human baby – tiny, helpless, needing to be fed and changed every few hours.  What was different about this one?

Babies come with lots of expectations attached.  We wait for months before they arrive.  But the people of Israel – God’s Chosen People – had been waiting for this baby for generations.

Again, why?  What made this baby so special?  Why the long-expected wait?

Not only would THIS baby fulfill many promises, but he was also a foreshadowing of THE PROMISE.

The Israelites were a forgetful bunch, often given to grumbling and whining about their circumstances (never happens to us, right?). Even though God delivered them from the oppressive hands of the Egyptians, even though He parted the waters of the Red Sea so they could cross, even though He provided daily for their meals in the wilderness and for their every need, they were whiny, discontented, and sure they knew better than God what they needed.

In 1 Samuel 8, the Hebrew people demanded of Samuel (the judge God had chosen) that he put a king in charge of them. This whole, “We’re God’s Chosen People, set apart to show the world His Glory” thing wasn’t quite working out, in their eyes. They were weary of living differently among their Gentile counterparts. So they wanted a human king (because the King of the Universe, apparently, wasn’t enough).

And this time, God let His children have what they wanted.  His forgetful, rebellious, given-to-whining children would get their way.

So Saul became Israel’s first king. Tall, dark, and handsome, Saul definitely looked the part of a king. Yet Saul was highly insecure and not very wise. His kingship started the Hebrew children on a roller coaster of a ride through the tumultuous reigns of kings. Some were good and wise. A few honored God and led the people well. But most were selfish, immoral men who rebelled against God with idol worship and ruled the Hebrew nation with heavy hands, fear and intimidation.  So the Hebrew children got what they asked for – a king – and it caused generations of discontent, despair, death, disaster and devastation.

Yet, they were also promised a King in the Spirit of David (a good king) who would reign over them one day. They were expecting this Messiah to be a King who would be mighty in battle–one who would destroy the opposing nations.

They got a baby.

So, what about this baby would change the situation they had put themselves in?

Let’s remind ourselves of what the prophet Isaiah spoke about this baby in Chapter 9:

Nevertheless, there will be no more gloom for those who were in distress . . . You have enlarged the nation and increased their joy; they rejoice before you . . . you have shattered the yoke that burdens them, the bar across their shoulders, the rod of their oppressor . . . (A few excerpts of v1-5:)

2 The people walking in darkness
have seen a great light;
on those living in the land of deep darkness
a light has dawned…
6 For to us a child is born,
to us a son is given,
and the government will be on his shoulders.
And he will be called
Wonderful Counselor, Mighty God,
Everlasting Father, Prince of Peace.
7 Of the greatness of his government and peace
there will be no end.
He will reign on David’s throne
and over his kingdom,
establishing and upholding it
with justice and righteousness
from that time on and forever.
The zeal of the Lord Almighty
will accomplish this.

THIS baby would be the King of Kings (Rev 19:16). He would govern with peace unending, with justice and righteousness. Forever.

The world – under tyrannical rule, fraught with despair and devastation – exhaled a deep sigh of relief and inhaled hope with that baby’s first cry.  Their hope had returned.  Hope of deliverance from unrighteous rulers.  Hope of deliverance from their own poor choices.  Hope of restored relationship with their God. Hope that God was beginning to reestablish His Presence among them.  They recognized in this birth that – even though God had been silent towards His people for hundreds of years – this child was a reminder He alone was able to still fulfill His Promise, to take His place in His Kingdom, to rule over His people.  No government or earthly king would keep His plan from coming to fruition.

So that baby – the one named Jesus – grew up and spent His life pointing the people around Him towards God, fulfilling prophecies and promises, giving His Father glory, doing things vastly different than previous kings and, in general, turning the world upside down.

Now that the baby has arrived, we wait again.  We live in this tension of already, but not yet. God has already fulfilled His Covenant promise to restore His relationship with His people, but He has not yet restored His Kingdom to its final order. We spend this season celebrating His son’s birth, but also annually remembering (as His forgetful children) that the King of Kings is coming . . . again.  As image bearers of the King, we prepare our homes, our tables, our office desks, our gifts . . . as reminders that the King is reestablishing His presence among His people. We wait for Him to rule His Kingdom with justice and righteousness.

So where do you find yourself today?  In darkness?  Despair?  In desperate need of hope? Have your choices led you to this place?

Rest in the One Who – even in the midst of what appears to look bleak and unending – is returning soon to take His rightful place on His throne.  Now THAT is a hope that will not disappoint.

This song summarizes beautifully the reason why we can confidently put our hope in this baby:

Please feel free to download the December prayer verse to use as a background for your phone or mobile device: