The simplest answer I have for that is, “I pray because Jesus prayed”.

That wasn’t always my answer.   When I was a child I would have said, “I pray because I’ll get a stomachache if I don’t pray before I eat.” (Not the kind of parenting I would recommend, by the way).

Later on, “I pray because everyone else is.”

Sometimes I’ve said, “I pray to get what I want; to make a deal with God.”

Other times my answer was, “I pray when I’m scared and desperate.”

All of those other reasons for praying don’t ring true.  Prayer isn’t a tool to get God’s attention.  Prayer is meant to be an intimate conversation.   Jesus knew His Father intimately and He prayed.  I want to know my heavenly Father too, so I pray.

Notice with me how Jesus prayed.  This story is in Mark 6 and let me just sum up what’s been doing on this day. This is the day Jesus hears the news that his cousin, John the Baptist has been beheaded.  He tries to go away with His disciples to mourn this loss, but the crowds follow him.  That crowd becomes the group of 5000 men that Jesus feeds with 5 loaves and 2 fishes.  So, it’s been a long, exhausting day for Jesus – physically, emotionally, and spiritually.

“And immediately He made His disciples get into the boat to go ahead of him to the other side to Bethsaida, while He Himself was sending the multitude away.  And after bidding them farewell, He departed to the mountain to pray.  And when it was evening, the boat was in the midst of the sea, and He was alone on the land.   And seeing them straining at the oars, for the wind was against them, at about the fourth watch of the night (3-6 a.m.), He came to them, walking on the sea; and He intended to pass by them.  But when they saw Him walking on the sea, they supposed that it was a ghost, and cried out; for they saw Him and were frightened.  But immediately He spoke with them and said to them, ‘Take courage; it is I, do not be afraid.’  And He got into the boat with them, and the wind stopped; and they were greatly astonished, for they had not gained any insight from the incident of the loaves, but their heart was hardened.”

Do you see Jesus alone on that mountain in prayer?  The sun has set on an excruciating day and He knows this is where He needs to be with His Father.  I wonder if He’s relieved that the disciples are gone.  I know He’s glad for the crowds to be gone.  As He prays He sees something … not with His human eyes because it’s pitch dark by now and the disciples are far away in the middle of the sea.  But with His spiritual sight Jesus sees His friends struggling – straining to row against the wind.

So He makes Himself available to them.   But “He intended to pass by them”.  He would not climb on board unless they invited Him.  He would not enter their struggle until they asked for His help.

“When they saw Him walking on the sea, they supposed that it was a ghost, and cried out; for they saw Him and were frightened.”

Even that prayer was answered.  Jesus calmed them first, and then He stepped into their boat and calmed the sea.

I notice a contrast here: the reason Jesus prayed was much different from the reason the disciples prayed, don’t you think?

Jesus prayed because He longed for time with His Father, especially after struggling through a difficult earth-day.  Yes, Jesus was God but He lived in the flesh too and His body got tired and His heart ached just like yours and mine.  Jesus prayed, I believe, in gratitude for His day as well.  He understood the miracles of healing and feeding and He wanted to talk to His Father about that – to share the joy with Someone who understood.

The disciples prayed in desperation, not out of faith or an intimate understanding of God, but really in spite of it.  Remember that last verse?

“they were greatly astonished (at the calming of the storm), for they had not gained any insight from the incident of the loaves, but their heart was hardened.”

If they had understood what Jesus was doing all along – the miracle of healing and feeding the 5000 — their hearts would NOT have been hard.  They would have seen Jesus coming to them.

I pray because Jesus prayed.  I do want my prayers to reflect my faith and love of the Father.  I want to live grateful for the wonder of each day and notice God at work around me.

But I will admit that much of the time I pray like those disciples on the water: 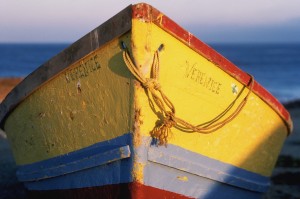 trying to do it on my own,

What makes the difference?  My heart.  When my heart is open to God and trusting Him I want to be with Him in prayer just like Jesus wanted to be with His Father.

When my heart is hard and closed off to God, I struggle.

But know this with me today … Even when I’m struggling Jesus is praying.   Now.  Today.  Jesus is praying for you and me just like He prayed for those disciples on the water.

When my grandmother died a few years ago I remember feeling a great loss for her as a prayer warrior in my life.  I knew that she had prayed for me every day of my life until her life ended.  I wondered who would step in the gap and pray for me until I realized that Jesus Himself is praying for me all the time.  There’s no prayer gap.  Heb. 7:25 says Jesus “is able to save forever those who draw near to God through Him, since He always lives to make intercession for them.”

Some of us are on the mountain of solitude in life praising God and some of us are rowing like crazy on the rough waters.  We’ll encourage each other as we come together in prayer groups to pray because Jesus prayed.

Today in your prayer groups you’re going to learn to look Upward to God first when you pray.  That’s what Jesus did.  Get to know God better with the women in your group. Give it a chance and open up your heart to God.

Thank you for being a God who sees us on the rough waters of life as well as the quiet mountains.

Thank you for Jesus who is our example and the story of the disciples who offer us hope in our own weak moments.

Bless us with your Presence as we pray together.  May Your Spirit lead and teach us together each time we meet.